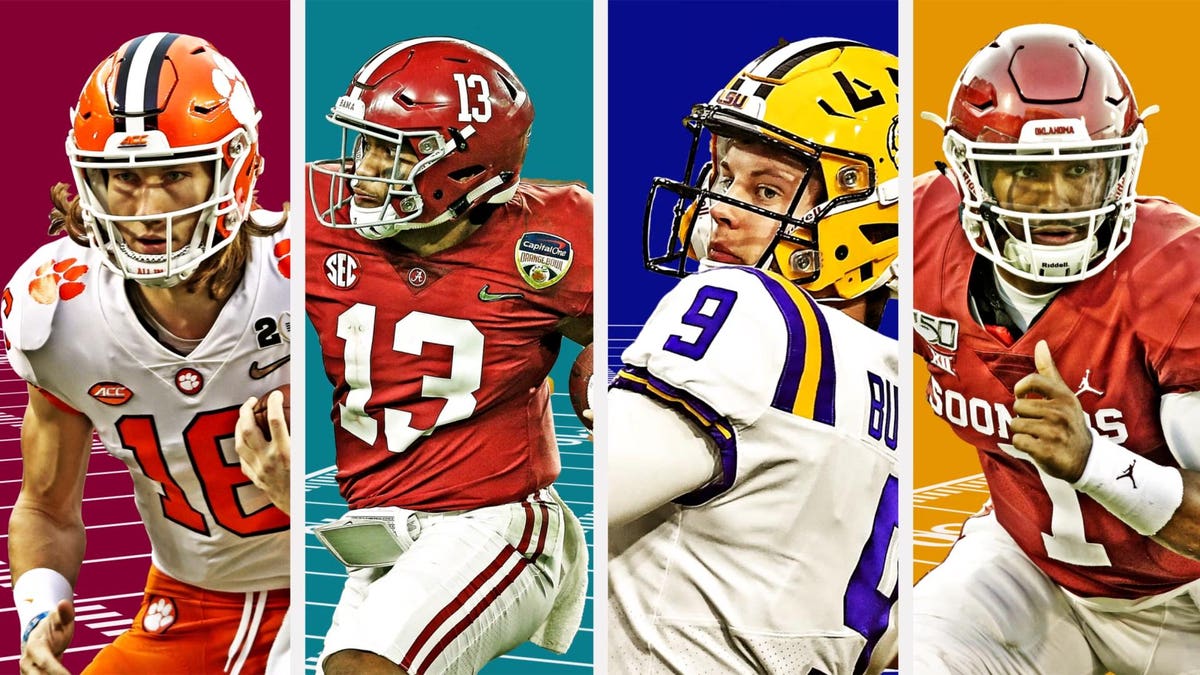 By the standards of most college football programs, the Clemson Tigers have a proud history, with a claim to the 1981 national championship and memorable postseason victories including the 2014 Orange Bowl. But as they entered the fourth quarter of the January 2016 national championship game, even with a 3-point lead and the sport’s No. 1 ranking, they still looked something like minnows next to the juggernaut Alabama Crimson Tide.

Sure enough, Alabama emerged from a spectacular 15 minutes of football—featuring a 95-yard kickoff return and a combined five touchdowns—with a 45-40 victory, dashing the Tigers’ dream of their first national title in 34 years. But what seemed like a disappointment at the time turned out to be just the beginning of a remarkable dynasty.

In the three-plus seasons since, the Tigers have made two title game appearances, taking their revenge against Alabama twice over, and have dropped just three games total. Clemson remains the title favorite for this season and is back on top of the rankings—once again a spot ahead of the Tide.

That tremendous on-field success has come with some impressive off-field dividends. The Tigers’ financial fortunes have grown so much, in fact, that Clemson now makes its debut on the annual Forbes list of college football’s most valuable teams; we credit the Tigers with average annual football revenue of $77 million, good for No. 25 in the country.

It turns out that the 2015-16 near miss was also the turning point for Clemson’s financial performance. That season, the football team’s revenues, as reported to the NCAA, increased 15% year-over-year, and total athletic department income jumped 26%, to $105 million. Put simply, winning can quickly produce profits as ticket demand skyrockets, merchandise flies off shelves and, most important of all, wealthy alumni start breaking out their checkbooks. During the year of Clemson’s first championship game appearance, total alumni contributions to the athletic department jumped a staggering 80%, to $35 million.

Graham Neff, Clemson’s deputy director of athletics, says the huge spike in contributions can’t be entirely credited to football, since the athletic department also received philanthropic donations tied to non-football projects, but that the school’s gridiron gang was undoubtedly the main driver. “It’s tough to put a percent, but obviously, at Clemson, football does drive so much of those annual contributions,” says Neff. “There is a strong, strong correlation between football success and the contribution increase.” That giving has been sustained, too: In 2017-18, Clemson took in a school-record $40 million in athletic contributions.

So much for amateur athletics—the sport’s 25 most valuable programs combine to earn an average of $1.5 billion in profit on annual revenues of $2.7 billion.

Clemson’s ranking among the nation’s top programs is especially impressive because the Tigers don’t have the benefit of massive conference distributions. Last year, the ACC distributed some $30 million per member school, neck-and-neck with the Pac-12 for the smallest payout among Power Five conferences. No wonder, then, that just one other ACC team cracks our top 25 (Florida State at No. 15, with average annual football revenue of $96 million across the three most recent seasons for which financial data is available: 2015-16, 2016-17 and 2017-18). At least that revenue pipeline should soon widen, thanks to the new ACC Network, which began broadcasting this season. Neff wouldn’t discuss exact numbers, but he says the network is already exceeding revenue projections, adding, “We do anticipate a good uptick from last year to this year.”

Until now, however, Clemson has largely relied on its school-specific revenue streams. And although contributions have made up the lion’s share of the recently increased revenues, the Tigers have been strong across the board.

Income from licensing and royalties was $13.6 million in 2017-18, up 68% from the year before Clemson’s first championship game appearance. And that total doesn’t take into account Clemson’s new Nike deal; last year the athletic department extended its apparel contract through 2027-28, with Nike now paying a 14% royalty rate, up from 11%. Between cash and the retail value of allotted gear, the company provides Clemson an average of $5.7 million annually, more than double the prior $2.6 million yearly payout.

Ticket revenue is also up to $25 million, rising 26% between 2014-15 and 2017-18, and that has less to do with the number of tickets sold than it does Clemson’s ability to flex its pricing power, says Neff. Clemson reportedly has the ACC’s most expensive football tickets, and its prices are more in line with those of SEC programs.

More winning means more giving, and these days Clemson wins a lot. The Tigers’ total athletic contributions jumped 80% in the year they first challenged Alabama for a national title.

All that money has allowed Clemson to spend like a real contender. In 2017-18, Clemson’s football team set program records for spending on coach salaries ($14 million), game expenses ($3.4 million), recruiting ($1.8 million) and equipment ($1.8 million). In April, the school signed head coach Dabo Swinney to a ten-year, $93 million contract extension, the biggest deal ever given to a college football coach. Two years ago, Clemson opened the Allen N. Reeves Football Complex, a $55 million project that keeps the Tigers competitive in college football’s never-ending facilities arms race, and more money may be on the way for improvements at Memorial Stadium, after the athletic department reportedly poured in nearly $100 million from 2004 to 2015. Neff says the next major investments will focus on off-the-field athlete support, including “career services, financial literacy, leadership development and diversity and inclusivity programming.”

Clemson is hardly the only program cashing in on the ever-rising tides of college football, but the Tigers’ financial success stands out even against the background of college athletics, and they should continue to ascend after going 15-0 and capturing the championship last season (financial data from that season won’t be reported until the end of the year). Neff says that last year featured steady financial growth: Licensing revenue tends to be strong in title-winning years thanks to championship merchandise, and contributions held steady despite the new tax law that removed deductions for some athletic giving.

But for all that success, Neff says the main goal for the next few years is to recognize that there is still plenty of catching up to do. “We look around often, and our peers have had a bunch of success and are doing a lot of similar, really awesome things,” says Neff, “so it’s not like Clemson is the trendsetter across the whole spectrum by any stretch.”

It’s a sensible approach, and one very much grounded in truth: The nation’s most valuable programs still generate nearly twice as much money annually.

This year, Texas A&M again leads the way with $147 million in average football revenue. As we detailed last year, much of the Aggies’ recent earning power has come from a wave of alumni contributions tied to athletic construction projects. In 2017-18, contributions earmarked for football were $46 million, up 34% year-over-year.

It’s not the most sustainable revenue stream, since contributions should eventually fall toward previous levels—the athletic department’s CFO told USA Today that he expects revenues to “normalize” following 2019—but it’s not just generous alumni keeping the Aggies on top. The team also ranks third in revenue from ticket sales ($41 million), and the A&M athletic department is fifth among those on our list in total income from licensing and sponsorship deals ($19 million).

The Aggies edge out the cross-state rival Texas Longhorns for the No. 1 spot; in fact, the two teams are tied in average annual football revenue, but the Aggies come out on top thanks to a slightly superior operating profit—$94 million to $92 million—which we use as a tiebreaker (our methodology is described in more detail below).

Texas, long the sport’s financial juggernaut, has a national fan base that gives the school a tremendous amount of leverage when negotiating its corporate partnerships: The Texas athletic department counts some $43 million per year from royalties and licensing, blowing away the field (Michigan is second in the category, with $28 million). In addition,its Longhorn Network deal with ESPN will pay the school and its athletic department some $12 million this year.

Michigan, Alabama and Ohio State round out the top five most valuable college football programs. The Buckeyes and the Wolverines are first and second in average annual football ticket revenue ($54 million and $44 million), and each ranks among the top five in sponsorship income. Alabama, meanwhile, is one of just five teams to earn more than $30 million annually from media rights. (The Crimson Tide are also the sport’s biggest spenders by far; with $74 million in average annual football spending, Alabama shells out 30% more than the next-highest-spending program in the country.)

Most media rights revenue flows through conferences, thanks largely to their massive national TV deals and to conference-specific networks. The SEC Network has dominated even in the age of cord cutting; 10 of the top 15 teams in media rights revenue call the SEC home, and last year the SEC distributed more than $43 million per member school. Our team numbers don’t account for last season, but Big Ten schools are now topping even their SEC rivals in conference revenue: Thanks to new TV deals with ESPN and Fox, the Big Ten distributed $54 million to each member school receiving a full share.

The importance of conference money—which also includes winnings from bowl games, including the College Football Playoff and the NCAA basketball tournament—couldn’t be on clearer display in our ranking: The SEC and the Big Ten dominate our list, combining for 17 of the 25 most valuable teams. No other conference has more than three teams in the top 25.

Perhaps it’s surprising, then, that independent Notre Dame ranks eighth, with average annual revenue of $120 million. The lack of conference-level revenue doesn’t hold the Irish back, however, since Notre Dame has one of the nation’s biggest fan bases. That’s allowed the team to cash in on an NBC broadcasting deal reportedly worth $15 million annually. In addition, revenues from Notre Dame’s football ticket lottery are not reflected here—that money goes straight to the university and thus doesn’t land on the athletic department’s books—so the Irish’s performance is all the more impressive. Only four teams are more profitable.

Falling off the list this year is Texas Tech. Others just missing the cut include Minnesota, TCU and Utah.

The good news for those programs? Clemson has shown the path to the top 25: All it takes is a couple of championship game appearances and timely wins over the most dominant team in the history of the game.

Our list of college football’s most valuable teams is ranked by average football revenue across the 2015, 2016 and 2017 seasons, the three most recent for which financial data is available (2018 numbers won’t be reported until the end of the year). Revenues are rounded to the nearest million, and ties in revenue are broken using average annual operating profit. We rely on data reported to the NCAA and the Department of Education, and we’ve made adjustments to line items like contributions and royalties to correct for differences in accounting practices.

It’s a game of inches—and dollars. Get the latest sports news and analysis, once a week in your inbox, from the Forbes SportsMoney Playbook newsletter. Sign up here.

Wait is there more to this story
,br>

Defense has been the driving force behind No. 14 Oklahoma State’s 5-1 start. If the Cowboys are going to pull a rare win over No. 18 Oklahoma in the Bedlam rivalry in Week 12, they’ll need their defense to come through again.   Let’s start with the numbers. Oklahoma State has the No. 8 defense […]